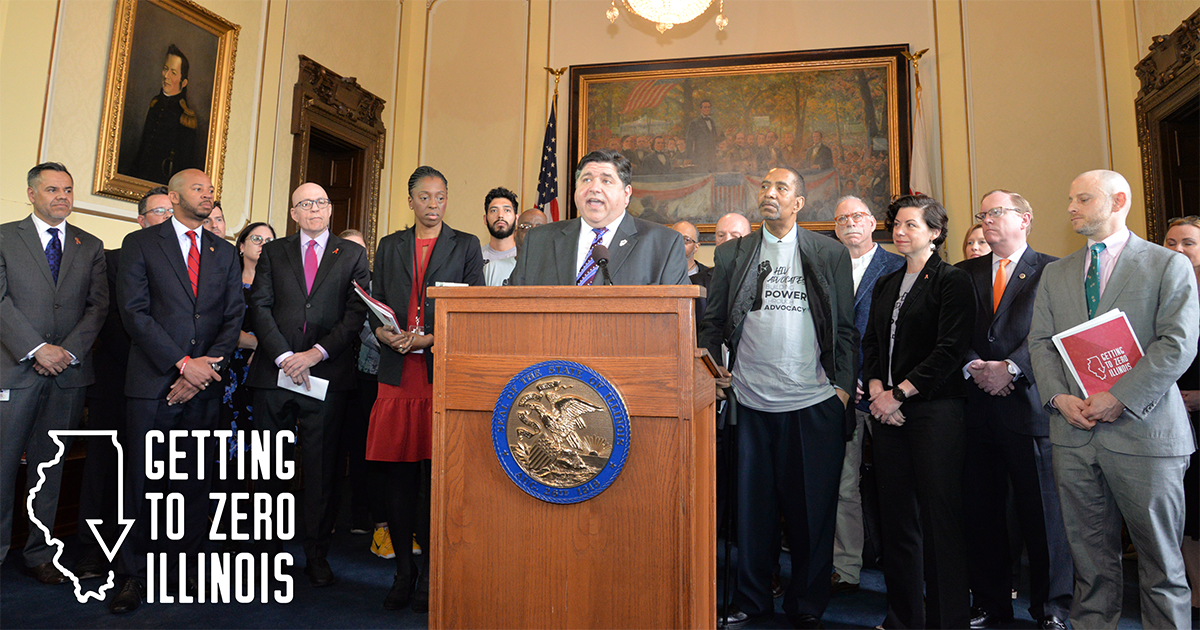 The State of Illinois, City of Chicago, and the AIDS Foundation of Chicago Announce Getting to Zero Illinois HIV Plan


On May 14, Governor JB Pritzker, Mayor Rahm Emanuel, the Illinois Department of Public Health (IDPH), the Chicago Department of Public Health (CDPH),  and the AIDS Foundation of Chicago (AFC) introduced the Getting to Zero Illinois (GTZ-IL) five-year comprehensive plan that details actions to end the HIV epidemic in Illinois by 2030. As part of the Getting to Zero Illinois collaboration, the plan includes goals and strategies that will reduce new HIV transmissions, support the health of people living with HIV and AIDS, and help Chicago and Illinois get to “functional zero,” a point where the HIV epidemic can no longer sustain itself.


“After taking steps to end the HIV epidemic during my first weeks in office, today I’m proud to say we have a five-year plan to get to zero in Illinois,” said Gov. JB Pritzker. “Through partnerships and a renewed focus on testing, treatment and prevention, we will save lives and stop HIV from impacting so many communities.”


“While unprecedented investments have led to a record-low number of HIV diagnoses in Chicago, our work is not done until we hit the number zero,” said Mayor Rahm Emanuel. “By collaborating closely with residents, providers and advocates, we will continue to be on pace to end the HIV epidemic in Chicago within the next ten years.”


Getting to Zero Illinois is a statewide public-private partnership of 50 government, community, and health care organizations that was launched in 2017. It has two primary objectives. The first objective is to increase the number of people living with HIV who are virally suppressed (when an individual has sustained viral suppression, the virus cannot be transmitted sexually, a concept known as undetectable = untransmittable, or U=U). The second objective is to increase the use of pre-exposure prophylaxis (PrEP) among people who are vulnerable to HIV. PrEP is a daily pill and strategy that is nearly 100% effective at preventing HIV transmissions.


The plan is being released after almost two years of planning and preparation, which included town hall meetings, surveys, focus groups, draft recommendations, and feedback from communities all over Illinois. The plan focuses on major shifts in six areas:

“The goals that are set in this plan are high but so are our residents’ expectations,” said CDPH Commissioner Julie Morita, M.D. “Every person living with HIV in Chicago deserves access to high-quality care. Together with our partners, we will continue transforming HIV care and prevention.”


To further accelerate progress, Mayor Emanuel and CDPH are providing $40 million to over 40 organizations to develop and support programs in health care, health disparities, housing, and education and awareness. The new funding opportunities aim to increase access to HIV clinical and supportive services for HIV treatment and HIV PrEP and address the structural barriers preventing people from accessing responsive and high quality HIV services.

“Through our HIV prevention and support efforts, our goal is to get to a point where the transmission of HIV cannot be sustained – approximately 100 or fewer new HIV diagnoses each year,” said IDPH Director Dr. Ngozi Ezike.  “We must focus on eliminating the stigma of HIV, addressing health disparities, and educating communities on how to prevent HIV transmission, as well as identifying where people can go for support and health care services.  The Getting to Zero Illinois plan has strategic steps to help us attain our goal.”


In 2017, an estimated 39,842 people were living with HIV in Illinois, 23,835 of whom lived in the City of Chicago. There were 1,375 new HIV diagnoses in Illinois in 2017, an almost 35% decrease from 2006 to 2017. In Chicago, there were 752 new HIV diagnoses in 2017, the fewest since 1990. However, despite significant progress in reducing the number of new HIV diagnoses, specific communities continue to be disproportionately impacted by HIV, especially Black and Latino/Latinx gay, bisexual and other men who have sex with men; transgender women of color; and Black women.


“The AIDS Foundation of Chicago (AFC) is proud to partner with IDPH and CDPH to co-lead development of the GTZ-IL plan,” said John Peller, President & CEO of AFC.  “We are grateful for the community leaders and people living with HIV who have worked so hard to ensure that this plan will address the specific needs of people living with and vulnerable to HIV across Illinois.”


In February 2019, Governor Pritzker signed an Executive Order that included funding for increased HIV testing, PrEP, the African-American HIV/AIDS Response Act, and other public health initiatives.  In addition, the state committed to more closely monitor viral load metrics to ensure that more people in Illinois are achieving and maintaining an undetectable viral load.


Additionally, IDPH is providing almost $26 million to 62 agencies across Illinois to create and support sustainable HIV prevention and care programs that align with the Getting to Zero Illinois plan.  Agencies will promote surveillance, perinatal HIV prevention, same-day HIV and hepatitis C testing, syringe services, linkage to HIV treatment, PrEP, and other HIV prevention tools.  PrEP4Illinois will continue to provide PrEP education and prescriptions, regardless of ability to pay. You can read the plan at GTZillinois.hiv/plan. For more information about PrEP, call the Chicago PrEP Line at 872-215-1905 or visit PrEP4Love.com.  For more information about HIV testing visit www.PrEP4Illinois.com.